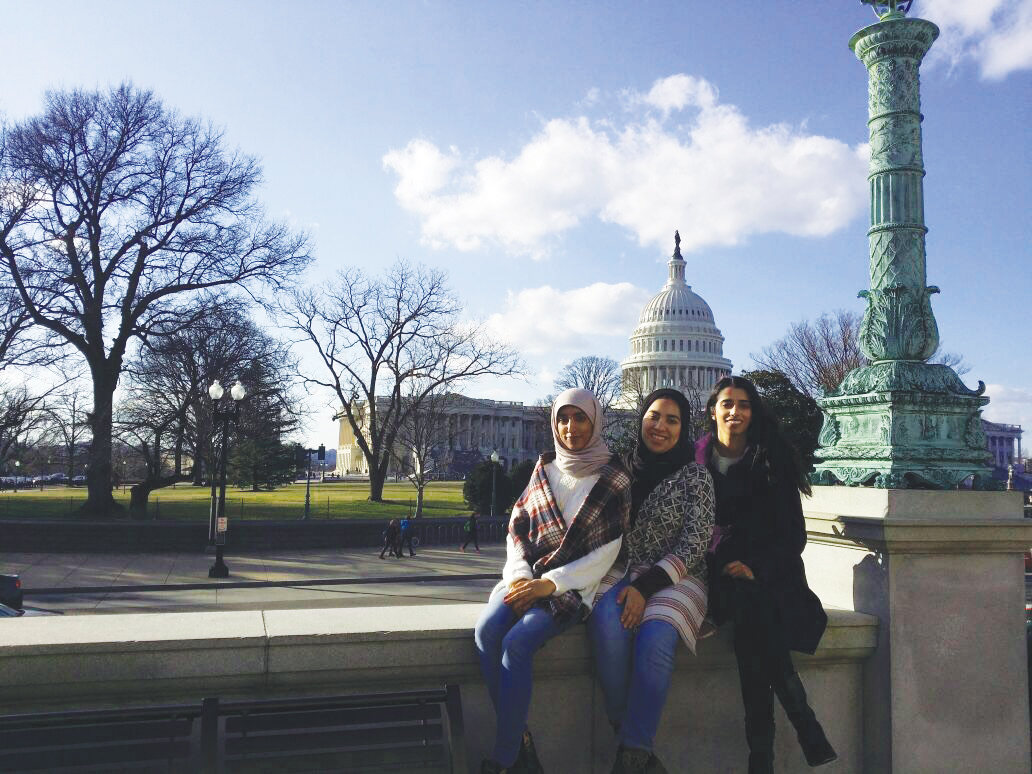 By Katherine Pollock | This story appeared in the July 2017 edition of AUC Today.

“The highlight of my time in Washington, D.C. would be the Women’s March,” said Zainab Al Haddad, integrated marketing communication major who spent a semester abroad in the United States as part of the Tomorrow’s Leaders Scholarship Program. “As a Muslim Arab, I went there with a cause: to use my voice for Arab women and to stand up for women’s rights and equality.”

For many AUC students like Al Haddad, studying abroad is a transformative component of their University experience, gaining knowledge both in the classroom and by living in a foreign country.

Al Haddad, along with political science students Fatema Nooruddin and Abrar Abdulla, were given the opportunity to travel to Washington, D.C. to study at the American University (AU) as part of the Tomorrow’s Leaders Scholarship Program, a four-year scholarship program sponsored by the Office of Assistance Coordination, Bureau of Near Eastern Affairs at the U.S. Department of State. Students from the Middle East and North Africa are selected for this program based on their academic excellence, leadership potential and proven track record in community service and volunteer work. One benefit of this leadership program is studying for a semester abroad in the United States for eligible Tomorrow’s Leaders students.

After going through a competitive application process, all three students — originally from Bahrain — decided to enroll at the American University in Washington, where they took classes in its political science program. “I was selected by the Tomorrow’s Leaders Scholarship Program because they saw potential in me, which encouraged me to continue building my leadership skills,” said Abdulla. “Therefore, it is essential for me to be constantly active and facilitate the way for positive change, development and a better understanding for a better world.

Whenever I get the opportunity to help those in need and fight injustice, I will make sure to stand by those who are oppressed and be the voice for the voiceless. I believe that each one of us can bring about positive change, even if small, but we need to act.”

A Voice for Women

All three students emphasized the formative experience of being in the U.S. capital during such a significant time in the country’s history. “Washington, D.C is the heart of politics, and being there during such a critical time in the United States gave us a chance that does not come by every day,” said Al Haddad. “We made it a goal to experience as much as we can from this democratic change and to be a part of it by using our voices for Arabs and women. It is important to engage and integrate ourselves into this community to meet people. We were seen as advocates for Arabs, and it was essential to present Bahrain, Egypt and AUC in a positive and powerful light.”

Taking part in the Women’s March, the three students were touched by the heartfelt welcome. “In the march, we were welcomed warmly by the people there; the support for Arabs and Muslims was overwhelming,” said Al Haddad. “All the fears I had as a Muslim coming to the United States during this time were put to an end because I saw the beauty in the people there. The Women’s March was full of powerful messages and positive energy. The masses of people marching for women’s rights and democracy was a breath of fresh air. There was no hate or fear; citizens were standing to defend their rights and embracing the differences between them. The march was truly an astonishing moment that portrayed democracy at its finest.”

Echoing these sentiments, Nooruddin said, “Our goal at the Women’s March was to show the world who we are. We are diverse. We are strong. We are determined. The Arabic word “hurra” translates to ‘I’m a free woman,’ which also means that I can make my own choices on my own.”

In addition to the Women’s March, the three AUC juniors were able to attend important events, such as the U.S. Presidential Inauguration, immigration ban protests, as well as high-level educational seminars with U.S. ambassadors, navy generals and other top government officials. “We also got to attend an AU Interfaith Chapel Service in memory of Martin Luther King, Jr., which built bridges and fostered peace among various religious communities,” said Abdulla.

The most exciting part of the experience for the three students was witnessing politics firsthand. “We were able to closely observe and experience the various political processes and dynamics, which was beneficial for me as a political science student,” explained Abdulla. “This broadened my horizons and allowed me to have a new outlook on political systems beyond the Middle East.”

As Nooruddin put it, they saw history in the making. “We were so lucky to be in Washington, D.C. during this specific time period because we were definitely witnessing history and getting to participate and experience all of those changes,” she said. “The reaction to those changes is a priceless, unforgettable experience.”

Nooruddin also highlighted the educational opportunities they have gained during their time at AU. “Taking courses like Modern Jewish Civilization, for example, which was taught by a passionate Jewish professor who is specialized in this field of study an was amazing experience,” she said.

While they have faced many challenges during their time in Washington, such as misconceptions and stereotypes, Nooruddin also emphasized that “we have mostly received love from people, and I think we are so lucky because of how diverse and accepting people are in D.C.”

Echoing this sentiment, Al Haddad added that one of the biggest challenges she faced was “dealing with the misconceptions and fears that surround Arabs.” She explained, “I would be questioned by my American peers about tradition, faith and political issues. I spoke and debated with them, answering their questions in order for them to have a better understanding of Arabs and realize just how diverse we are. I would always say, ‘The Middle East is made up of different countries, cultures and societies. You should visit us one day.’”

Another highlight of the students’ study-abroad experience was meeting and bonding with people from around the world. “Some of the close friends we made are from countries like Guatemala, Argentina, Korea, Cambodia, Nepal and, of course, people from all around the United States,” Abdulla noted.

Reflecting on her experience, Abdulla added, “Through my discussions with people from different cultures and religious and political affiliations, I became more aware of many issues, such as gender and interfaith issues, refugees and immigrants, and more. Now, I can transfer my personal experiences and share the knowledge I gained back at AUC and in my home country. Being abroad also expanded my networks, which will help me academically and professionally after graduation. I am privileged to have countless exceptional experiences and to be able to pursue my studies in Egypt and the United States. Spending a semester abroad broadens one’s knowledge and develops one’s personality. I would encourage those who are capable of traveling abroad to give it a shot; it is really worth it.”

For more information about studying abroad at AUC, click here.

0 comments on “A New World Abroad in Washington”