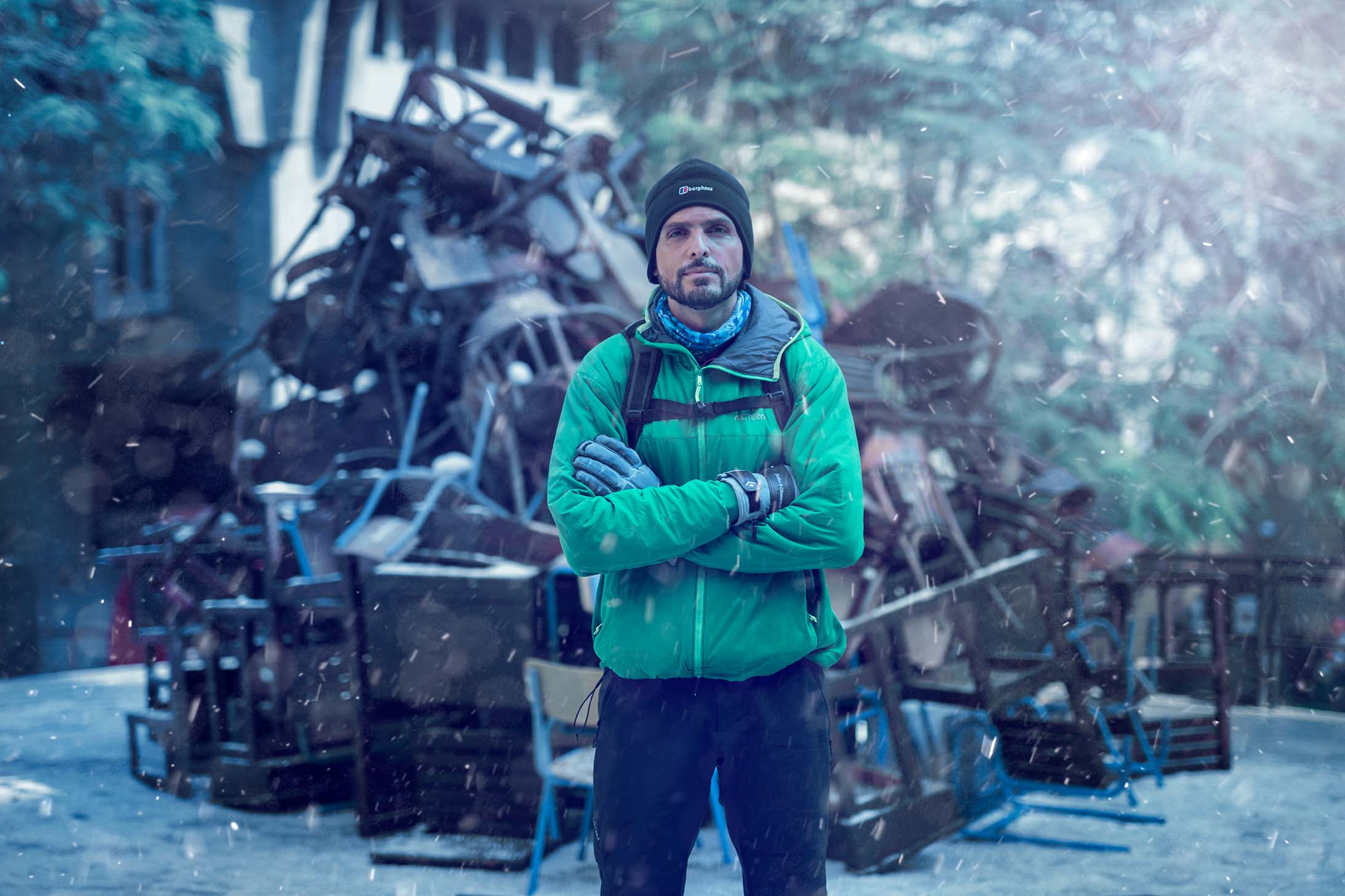 Sports: Alumni in this category have outstanding athletic accomplishments are recognized as global champions. They are pioneers in their sports, breaking world records and bringing glory to their home countries.

From climbing Everest to scaling Antarctica’s highest mountain range that no one had climbed before, Omar Samra is a record-breaker who is always reaching for the top

As a child, Omar Samra was “severely asthmatic.” His family expected him to become an engineer or perhaps a doctor. And yet at the age of 28, he was standing at the top of Mount Everest, the first Egyptian to climb the world’s highest peak. And he went on to climb the highest mountain on every continent, ski to both poles and scale mountains in Antarctica that no one had scaled before. Today, his definition of success is something much different, simpler: Do your best.

“I charted a pretty unique path, having started with a set of pretty traditional choices,” he says. “I had these big ideas that made no sense at the time. but I found that if you take it step by step. If you’re willing to persevere, you can make it happen. You can achieve whatever you set your mind to.”

Samra’s work today is a combination of international business and personal inspiration. He runs a successful travel and adventure company, Wild guanabana. He runs a nonprofit (named after his late wife, Marwa Fayed) that provides progressive educational content and tools to underprivileged children and refugee families. And he serves as the United Nations Development Programme’s goodwill ambassador to Egypt. After climbing Everest, he says, people wanted to know more about what it meant to make such a commitment, to take such a risk. “It made me feel that maybe there is something special that I have done that is a timely thing, and if I don’t act now on it, it’s going to fade away.”

Samra often returns to AUC to talk to current students. His message: The choices you make today aren’t worth a tremendous amount of stress. If you take a risk that doesn’t pan out, “it really doesn’t matter. You have to make the best decision you can with the information you have available.” At the same time, those decisions can add up to a trailblazing life. “You can break the mold. You determine your destiny.”

Samra sees AUC today as Egypt’s true international University — a “thought leader” that “offers a model of how education should work in the world, and how a university should work in its community.” The University has a “broader role” than simply graduating students. Through academic programs and arts events, athletics and publishing, AUC “opens the gates” to a wider world.

A summit is no measure of a life, Samra says. “literally, you are standing on a 2-meter-by-2-meter piece of real estate or snow,” he says. “It’s all symbolic in the end.” He sees the pressure young people today face to succeed, and he knows the reality: What’s important is to strive for something. “There are some days when you aren’t going to be able to get out of bed in the morning and other days when you can. If on most days you’re able to do your best, then I think you’ve already succeeded.”

Previously a banker, Amany Khalil shifted careers, finding her passion in sports. She is the first Egyptian woman to complete the 2016 Ironman Barcelona triathlon in the age group 50 to 54. The triathlon consists of a 3.86k swim, a 180.25k bike ride and a 42.20k marathon run. Khalil was named by Women of Egypt magazine among Egypt’s 50 Most Inspiring Women of 2016. “Age is only a number, and it’s all about the passion for what you want to do and achieve in life,” she says.

The only woman from the Egyptian national Archery Team to qualify for the Rio 2016 Olympics, where she came in 56th place, Reem Mansour won the silver medal in the African Archery Championship in Windhoek, Namibia. “The main lesson I learned from Rio is that it is absolutely necessary to take yourself out of your comfort zone and constantly challenge yourself,” she says.

Nour El Tayeb ’16 and her husband Ali Farag, who spent his freshman year at AUC before transferring to Harvard University, where he graduated with a degree in engineering sciences, are the first married couple to win championships at the 2017 U.S. Open Squash Finals. They have made history, becoming the first married couple to claim major sports titles on the same day.

Recipient of AUC’s Omar Mohsen Athletic Achievement Cup, El Tayeb is one of four Egyptian squash champions who have been granted the State Medal of the First Order for retaining Egypt’s first-place rank in the 2018 Women’s World Team Squash Championship.

The world’s top squash champion, Farag achieved the No. 1 world ranking in the Professional Squash Association (PSA) and was crowned a world champion in the 2018-2019 PSA World Championships.

The first Egyptian and Arab woman to qualify for the Olympics in the 10k open-water swim, Reem Kassem came in 25th place at the Rio 2016 Olympics. “It was the toughest race I ever competed in,” she says. And, of course, Kassem’s Olympic experience would not have been complete without meeting her role models, gold medalist swimmers Michael Phelps and Katie Ledecky.

Caroline Maher is the first Arab and African woman to be inducted into the Taekwondo Hall of Fame. Previously ranked as third worldwide, Maher has earned more than 130 trophies in global and regional competitions across 40 countries. She was selected by the Ministry of Sports for three successive years among Egypt’s top 10 athletes. Featured by UN Women, Maher is the youngest member of the Egyptian Parliament, youngest member of the Women’s Committee in the World Taekwondo Federation and youngest board member of the African Taekwondo Union.

Pentathlete and AUC sophomore Haydy Morsy won first place at the 2019 Pentathlon African Championships, qualifying her for the 2020 Summer Olympics in Tokyo. Morsy competed in the Rio 2016 Olympics, where she came in 33rd place, and the Nanjing 2014 Youth Olympics, where she finished in sixth place. She won a gold medal at the first of four World Cup competitions in the 2019 modern pentathlon season and was awarded First Prize Egyptian Athlete by Egypt’s President Abdel Fattah El-Sisi at the 2019 Aswan-Arab Youth Platform.

A national rowing athlete, Asmaa El Zohairy holds the world record in the 19-29 age category for lightweight women and the Egyptian record for lightweight women in the standard 2k distance — both on the indoor rowing machine and only three years since she started practicing the sport at age 27.

Ranked fifth worldwide, Nouran Gohar is crowned a Double World Junior Squash Champion (2015 and 2016) — the fourth woman globally to win this championship more than once. She has received the State Medal of the First Order for retaining Egypt’s first-place rank in the 2018 Women’s World Team Squash Championship.

After graduating from AUC with highest honors in electronics and communications engineering, Tarek Momen decided to pursue his dream of becoming a professional squash player. He is now ranked third worldwide on the Professional Squash Tour. He also won the silver medal at the World Championship held in Chicago this year.

One of Egypt’s best squash players on the national and international level, Omar ElBorolossy maintained his ranking amongst the top 20 professional players in the world for eight years, besides being Egypt’s #1 from 1999-2002. He is the first DNAFit certified Egyptian squash trainer and the founder and managing director of ElBorolossy Squash Academy, the first specialized squash training center in Egypt, Africa and the Middle East.

0 comments on “Ahead of the Game”