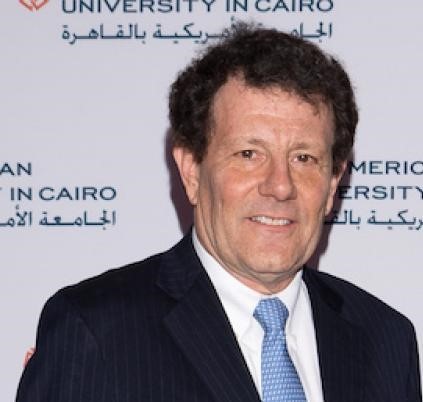 Journalism and News: Alumni in this category have excelled as journalists, authors and media professionals, using their writing and communication skills to voice the truth, keep the public well-informed and induce positive change. Their work has been recognized nationally and internationally, and they are at the forefront of the media industry.

Teaching English as a Foreign Language

Writer Lawrence Wright arrived at AUC in 1969 wholly by chance. He strongly opposed the Vietnam War and, after graduating from Tulane University, applied for and was granted status as a conscientious objector on the condition that he get a job that somehow served the interests of the United States. He asked at the United Nations in New York and was given a list of U.S. institutions abroad, including AUC. Two days later, he stood before his first class of English students in Cairo and began an experience that, in many ways, set the tone for a storied life that followed.

Today, Wright is a staff writer for The New Yorker and author of 11 books, including The Looming Tower: Al-Qaeda and the Road to 9/11, for which he won a 2007 Pulitzer Prize. In 1969, he was a kid from Dallas who had grown up in the Methodist Church. living in a place deeply unfamiliar — a Muslim country where the few other foreigners then were Russians or Nazis — was thrilling, he says. “A lot of the pleasure I get out of my job as a reporter now derives from that initial experience of being thrust into a world that was so foreign, but at the same time so enthralling and friendly.”

That experience taught him what there was to gain from the unfamiliar. “Ever since then, I’ve always been drawn to situations that I don’t understand because I think there’s something in there for me, and there certainly was in the case of Egypt.”

The fact that AUC has been a consistent presence in Cairo even when diplomatic relations with the United States have been strained is important. “What’s more valuable than education and persistence?” Wright says. “It’s an enduring commitment. That’s what makes Egyptians trust it.”

Before working for The New York Times, where he earned three Pulitzer Prizes, Thomas Friedman came to Cairo to study Arabic at AUC

With a rich career in journalism spanning over 30 years and three Pulitzer prizes under his belt, The New York Times columnist Thomas Friedman first came to Cairo in 1974 to study Arabic at AUC. He then went on to work as a New York Times correspondent in Beirut — the beginning of a long and fruitful career in journalism. His writing focuses on everything from foreign affairs and global trade to globalization and the Middle East.

Friedman began his career with The New York Times in 1981, becoming Beirut bureau chief a year later, after which he moved to Jerusalem in 1984. He served in Washington as the diplomatic correspondent in 1989 and was subsequently the chief White House correspondent and chief economics correspondent.

His latest book, The World is Flat: A Brief history of the 21st Century (2005), was awarded the inaugural Goldman Sachs/Financial Times Business Book of the Year award. His book, From Beirut to Jerusalem (1989), won the 1989 National Book Award for non-fiction. The Lexus and the Olive Tree (2000), which has been translated into 27 languages, won the 2000 Overseas Press Club Award for best non-fiction book on foreign policy.

In 2004, Friedman received the Overseas Press Club Award for lifetime achievement and the honorary title, Order of the British Empire, by Queen Elizabeth II. In 2005, he was elected as a Pulitzer Prize board member.

Speaking in the Present Tense

A two-time Pulitzer Prize winner, Nicholas Kristof studied Arabic at AUC, which proved valuable to him as a reporter and set him on a successful path as a journalist

In choosing AUC in 1983, Nicholas Kristof chose journalism. He had just completed his legal studies as a Rhodes Scholar at the University of Oxford, and American law school was his next logical step. but Kristof decided instead to spend a year studying Arabic at AUC, setting himself on a path to a career in journalism that, to date, has spanned three and a half decades, earned him two Pulitzer Prizes and made him a leading voice on international human rights.

Kristof had traveled quite a bit by the time he arrived in Egypt, including within Africa. but Cairo, at first, “was still a bit overwhelming.” The call of the muezzin would jolt him out of bed. And he quickly learned that he would have to abandon the short form of his name — too close to a vulgar word in Arabic.

Traveling by bus to the Western Oases or to St. Catherine’s Monastery, Kristof bonded with fellow students and began developing an appreciation for the Egyptian landscape. “Over Christmas and New Year’s, I traveled to Sudan, riding on the tops of trains in northern Sudan, to report on the beginning of the civil war there, and completely fell in love with the region.”

Kristof wanted to spend all of his time at AUC speaking Arabic. “This was problematic because, for the first two months, I could only speak in the past tense,” he says. With time and help from instructors like Lisa White and John Swanson, his Arabic skills improved, and they have proved valuable to him as a reporter. “Everybody in the Arab world understands Cairo Arabic because of the Egyptian movie industry,” Kristof says. “So I didn’t always understand what an Algerian or Sudanese was telling me, but they could understand me.”

Kristof wishes more Americans spent time living abroad, in part to better understand the “prism of suspicion” through which much of the world sees the United States. “We would formulate better policy if we appreciated better that skepticism,” he said. And, in a more general sense, cultural exchange is essential for the United States and for Egypt. “Egypt is going through a difficult time, and I fear that the U.S. is turning inward as well,” Kristof says. “So it is particularly important that there be bridges to span the distance from Egypt to America in the coming years. I hope that more Egyptians can get to know the U.S. and more Americans can get to know Egypt. AUC can play a crucial role in that process.”

Lamees Al Hadidi was not an overnight sensation. Her story is a story of steps: hard work in one position leading to hard work in another, leading — many steps later — to being voted the best TV anchor in Egypt in two different polls (Al Ahram and Al Masry Al Youm); being named among the World’s Most Influential Arab Women (Arabian Business) and 50 Most Powerful Women in Africa (Jeune Afrique); receiving the Courage in Journalism award from the May Chidiac Foundation-Media Institute; and co-founding, with Emad El-Din Adeeb, the first daily business newspaper in the Arab world, Al Alam Al Youm.

The steps in between included working at NBC in Cairo; writing in English for The New York Times and in Arabic for Sabah El Kheir magazine; doing broadcast journalism for Al Arabiya, Al Jazeera, CNBC Arabia and MBC; hosting Etkalem on Egyptian television; and serving as lead anchor and host of CBC’s daily news show, Hona Al Asema (Here is the Capital). “As an undergraduate, Louis Greiss, the veteran journalist who was in charge of the public relations department, changed my life. He allowed me to write at Sabah El Kheir magazine, where he was editor. And that changed my path. Also, Saad Eddin Ibrahim, who taught me sociology, influenced the way I think and debate. And working at the Caravan made me realize that I want to be a journalist. What I took from AUC is the value of knowledge, research, accuracy and debate. And, of course, the value of friendship.”

All these steps later, she sees AUC’s role clearly. “AUC is more than a University. Many of the region’s leaders are graduates of AUC. That is both AUC’s challenge and its promise: to live up to the high standards it has set.”

When Louis Greiss was interested in becoming a journalist, someone suggested applying to AUC. Greiss took the advice and quickly became a prominent writer and editor. Greiss, who passed away last year, held several significant positions as a journalist and was a member of the Supreme Press Council. He co-founded Al-Ahram Weekly and was the former editor of Sabah El Kheir magazine. He also wrote several short stories, such as Al-Hobb Wal Mal and Haza Ma Yahduth Lel Nas. Reflecting on his time at AUC, Greiss once said, “There is only one place where you can study journalism — and that is The American University in Cairo.”

Ben Wedeman, a study-abroad student at AUC from 1980 to 1981, is CNN’s senior international correspondent based in Beirut, Lebanon. He has been working with CNN for the past 25 years, covering events regionally and internationally, including the Arab-Israeli conflict; the Balkan wars; the civil war in Sierra Leone; the U.S.-led invasion of Afghanistan; the wars in Iraq; the 2006 Lebanon-Israel war; revolutions in Tunisia, Egypt and Libya; the Syrian civil war; and the war against ISIS. Wedeman has earned multiple Emmy, Edward R. Murrow and Peabody awards for his reporting.

One of the most prominent Arab TV journalists with a large fan base, Mona Elshazly has conducted numerous TV interviews with prominent local and international figures, including heads of state, scientists and artists. For years, she has regularly contributed to raising public awareness through daily media coverage reaching millions of Egyptians. She received several media awards, including the Mustafa and Ali Amin Prize for Journalism, one of the most prestigious press awards in Egypt, and the United Nations Information Shield. She was named as the Most Influential Presenter in the Arab World in a CNN poll and best Egyptian Media Personality in the past 25 years by Al-Ahram Foundation. Elshazly currently presents the highly viewed program, Maakom Mona Elshazly, on CBC.

Laila Rustom is famous as a broadcast journalist, hosting cultural and entertainment shows. In addition to being a former TV host, she was a representative of the International Herald Tribune in Egypt. She also worked for state television programs in Lebanon and Kuwait.

Riham El Sahly entered the media field as a presenter on Nile TV. She moved on to host her program, 90 Minutes, on the private channel Al Mehwar, where she gained recognition. Currently, El Sahly presents on the daily evening talk show, Al Mowagaha.

AP investigative journalist Maggie Michael received the 2019 Pulitzer Prize for international reporting on famine and torture in Yemen’s civil war. With 15 years of experience covering conflicts across the Middle East, Michael supervises a vast network of Arabic- speaking stringers and reporters in different parts of the region.

As a TV presenter, Jasmine Taha Zaky has hosted several shows exploring a range of social, cultural and political issues. In 2016, she was the media consultant for Egypt’s minister of tourism, and in 2018, was on the advisory committee for the Cairo International Film Festival. She currently presents the TV show Ambassador Aziza on DMC and the opera program from the Cairo Opera House.

Ramy Radwan is the presenter of 8 El Sobh on DMC — which previously received audience ratings as the most viewed and popular morning show. Prior to that, he was a presenter on Ten TV, OnTV and OTV. Radwan spoke at the AUConnect series on challenges facing young media professionals.

A Bloomberg TV anchor, Yousef Gamal El-Din has been the host of Daybreak: Middle East since 2016. Over the years, he has interviewed heads of state, ministers, CEOs and billionaires from around the world. He first gained global recognition at CNBC and is the author of the best-seller, The Art of Executive Appearance.