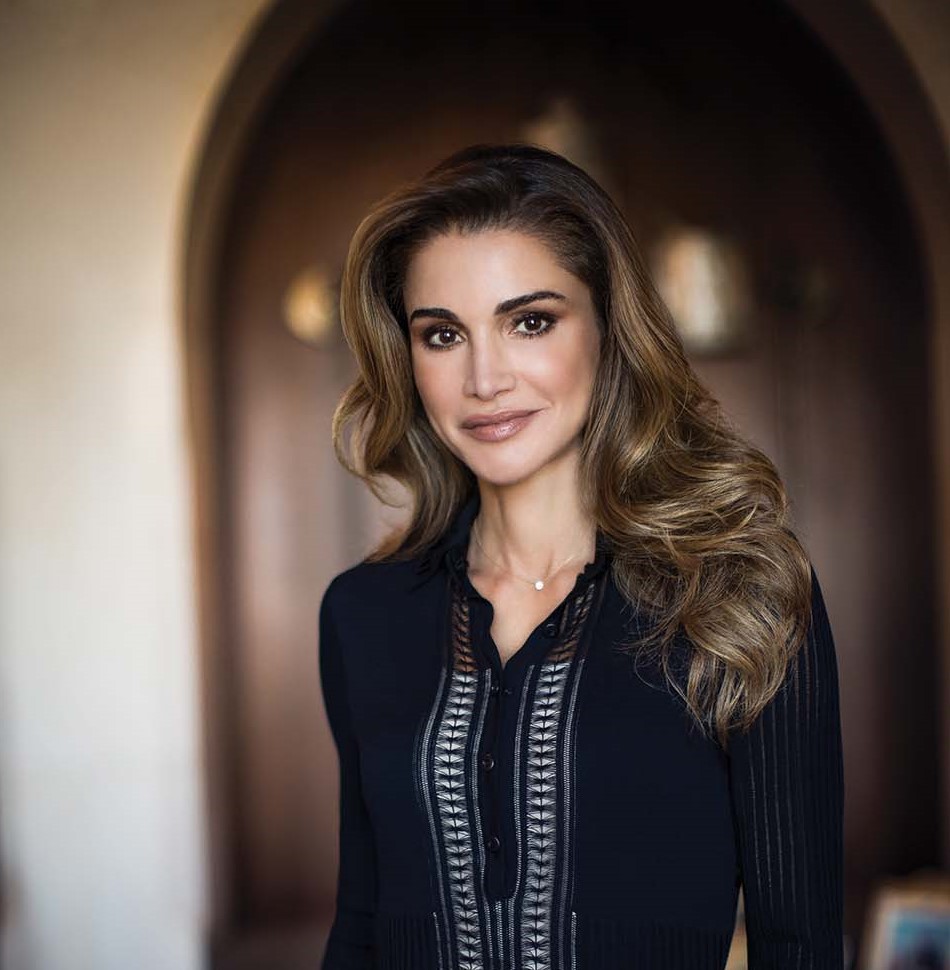 Government, Diplomacy and Public Policy: Alumni in this category serve their nations as federal, state, national and local government employees, leading the way for a more effective and responsive public administration in countries worldwide.

Queen Rania Al Abdullah is a positive force for progress in the region. Renowned for her advocacy work in education and community empowerment, she uses her platform to improve the lives of people in Jordan and beyond and promote tolerance and compassion between people of all cultures and backgrounds.

Her Majesty’s passion is education, as she believes all children should have access to stimulating classrooms and modern curricula. Under the Queen Rania Foundation for Education and Development, her efforts to complement the work of the Jordanian Ministry of Education have been channeled through initiatives that include the Queen Rania Teacher Academy, Edraak, Madrasati, Al-Aman Fund for the Future of Orphans and others.

Her Majesty is UNICEF’s first Eminent Advocate for Children and an Overseer of the International Rescue Committee. She has served as an honorary chair of the United Nations girls’ Education Initiative. In addition, she contributes to the work of the United Nations Foundation and World Economic Forum through her positions on their boards and was part of the high-level panel that advised on the 2030 Sustainable Development Goals.

For the Love of Egypt

The first woman to head the Ministry of Tourism in Egypt since its establishment 60 years ago, Rania Al-Mashat is well-known as a leading expert on monetary policy and international economics. As minister, Al-Mashat oversees various boards, including the Egyptian Tourism Promotion Board and the Tourism Development and Investment Board.

Al-Mashat earned her master’s and PhD in economics from the University of Maryland, College Park. She also completed executive education certificates in leadership from Harvard and Oxford universities. Al-Mashat served as an adjunct professor at AUC, teaching monetary policy and central banking. She was the keynote speaker at AUC’s 95th Commencement. Addressing master’s and PhD candidates, she said, “You are never too young to dream and never too old to achieve.”

Al-Mashat has worked with prominent financial institutions in Egypt and worldwide, including the International Monetary Fund, where she served as senior adviser to its chief economist, Professor Maurice Obstfeld, and senior economist. She has contributed several chapters to the IMF’s book, Advancing the Frontiers of Monetary Policy (2018). She also worked for 11 years at the Central bank of Egypt, modernizing and developing the bank as sub-governor and head of the Monetary Policy Department

Named by the World Economic Forum in 2014 as a Young Global Leader, Al-Mashat served on the boards of the Egyptian Stock Exchange, General Authority for Investment and Free Zones, Arab International Bank, Arab Investment Bank, Middle East Economic Association and Dean’s Strategic Advisory Board at AUC’s School of Business, among others.

Throughout her career, Al-Mashat has emphasized being driven by a sense of responsibility to give back to her country. “Serving Egypt by contributing to policies that would make the riches of the Nile flow to all its citizens is not only a mission; it’s a passion,” she said in her chapter of the book, Daughters of the Nile: Egyptian Women Changing Their World (Cambridge Scholars Publishing, 2016).

As Tokyo’s first female governor, winning by a landslide victory, Yuriko Koike brings a new kind of leadership to Japan’s capital with her illustrious political career.

Koike studied Arabic at AUC and graduated from Cairo University. She
was previously Japan’s first female minister of defense, minister of the environment, minister of state for Okinawa and Northern Territories affairs and member of the House of Representatives for Tokyo’s 10th district. Koike worked as a journalist and news anchor before embarking on politics. She notably interviewed many world leaders, including the late Palestinian leader Yasser Arafat in 1978, and received the Female broadcaster of Japan award in 1990.

Koike has a long history in journalism, politics and international affairs. Upon returning to Japan from her studies in Egypt, Koike worked as a translator and interpreter.

Most recently, she has taken the lead on Tokyo’s plans for the 2020 Summer Olympics, prioritizing cost-efficiency, environmentalism and women’s rights.

Sahar Nasr has made several strides as Egypt’s minister of investment and international cooperation since her appointment in 2017. Her most notable achievements include the passing of the long-awaited Investment Law, bringing new features to the investment landscape and introducing incentives to make Egypt one of the top investment destinations in the region, as well as establishing and strengthening partnerships with the Gulf, Africa and Asia. She is also a member of the Economic Committee in Egypt’s Cabinet of Ministers.

Nasr is governor of Egypt to several institutions, including the European Bank for Reconstruction and Development, Arab Fund for Economic & Social Development and the World Bank, where she previously served as a program leader and lead economist. She has managed funds in excess of $4.3 billion that were injected into the Egyptian economy in the shape of economic reform, economic policy development, small and medium enterprise development, and social housing.

Nasr returned to AUC in 2002 as a researcher and faculty member in the Department of Economics, where she is still an active contributor. She was honored by the Supreme Council of Universities in 2013 for her publications, research and academic career, during which she published more than 60 research papers, technical reports and books.

Throughout her professional life, Nasr designed and supervised numerous reform and finance programs in the Middle East, Asia, Latin America, and Central and Eastern Europe. In 2015, the Union of Arab Banks and World Union of Arab Bankers named Nasr as the Most Influential Woman in the Arab Economic Sector.

A strong supporter of education, AUC Trustee Ziad Bahaa-Eldin has a distinguished career in law

Speaking at AUC on “Egypt’s Economic Challenges: Implications and Recovery,” AUC Trustee Ziad Bahaa-Eldin stated that, “one of the factors that will have an immediate impact now is the capacity of the country to reallocate its resources right, through the right education that will lead to the right economic growth.” Bahaa-Eldin has frequently focused on the relationship between education and economics — both fields he has excelled in and generously contributed to.

Bahaa-Eldin is currently the founder and managing partner of Thebes Consultancy. He previously served as Egypt’s deputy prime minister for economic development as well as minister of international cooperation. He was also a member of the Egyptian Parliament representing South Assiut.

With a distinguished career in law, getting his start in the field practicing in the United States and Egypt, Bahaa-Eldin went on to serve as chairman of the Egyptian Financial Supervisory Authority and Egypt’s General Authority for Investment and Free Zones. He was senior legal adviser and board member of the Central Bank of Egypt, as well as international adviser at Goldman Sachs. He also served as senior legal adviser to the minister of economy from 1997 to 2000, after which he worked as a practicing lawyer for four years.

He is the founder and board member of the Ahmed Bahaa-Eldin Cultural Foundation, an organization that supports education and creative training for Egyptian youth in Upper Egypt. He also established the Ahmed Bahaa-Eldin Scholarship at AUC in honor of his father to award an outstanding scholar from Assiut.

Nabil Fahmy, Egypt’s former foreign minister, has come full circle, starting as an AUC student and returning as founding dean and professor of practice in the School of Global Affairs and Public Policy. He has had a distinguished diplomatic career as Egypt’s ambassador to Japan and the United States, and as political adviser to the foreign minister. Fahmy served as Egypt’s foreign minister from July 2013 to June 2014, where he aimed to reorient the country’s foreign policy and restructure its foreign ministry to face future challenges.

Fahmy was selected to be an external adviser to the president of the 72nd United Nations General Assembly, joining a group of globally eminent personalities with vast expertise who offer the president advice and critical opinion on today’s strategic questions.

After obtaining his bachelor’s and master’s from AUC, Fahmy
fell into a career in international relations upon being challenged by a colleague to sit for the foreign service exam. His career encompassed decades of prominent multilateral diplomacy, with a focus on conflict resolution and national security issues. In 2009, he received an honorary doctorate from the Monterey Institute of International Studies.

Ambassador Mervat Tallawy paved the way for Egyptian women in 1989 when she became the first female ambassador from the diplomatic corps in Egypt — serving first as ambassador to Austria and later as ambassador to Japan. From 1997 to 1999, she was Egypt’s minister of insurance and social affairs, and today, she is a board member of the Sawiris Foundation for Social Development. Tallawy has continuously worked to promote women on the job and by example, serving as the first secretary-general of Egypt’s National Council for Women in 2000 and participating in the drafting of the UN Convention on the Elimination of All Forms of Discrimination Against Women.

Former President of the Maldives

Maumoon Abdul Gayoom was singled out for success at a young age. Having served as the third president of the Maldives for three decades, Abdul Gayoom originally came to Egypt among a group of 15 people selected through the initiative of Mohamed Amin Didi, the first president of the Maldives, to get an education abroad. He studied at Al Azhar University and AUC. After returning to the Maldives, he served as undersecretary to the prime minister, deputy ambassador to Sri Lanka, representative to the United Nations and deputy transportation minister before becoming president. During his time at AUC, he also served as a research assistant in Islamic history from 1967 to 1969.

Nadia Makram Ebeid was Egypt’s first minister of the environment and the first woman in the region to hold that position. During her tenure, she was committed to integrating environmental considerations into Egypt’s national development policies. Her River Nile Pollution Prevention Programme resulted in the first declaration of the river being free from polluted industrial wastewater discharge in 50 years. From 2002 to 2003, she served as the Arab League secretary- general’s first special peace envoy to Sudan. Ebeid is currently executive director of the Centre for Environment and Development for the Arab Region and Europe.

Ambassador Walid Mahmoud Abdelnasser was appointed in 2013 as the Egyptian permanent representative to the United Nations, World Trade Organization and other international organizations in Geneva. He was Egypt’s ambassador to Japan in 2007, and prior to that, served as chief of cabinet for the Egyptian minister of foreign affairs, director of the Institute for Diplomatic Studies and deputy chief of mission at the Egyptian Embassy in Washington, D.C. He received his PhD from the Graduate Institute in Geneva. He occasionally taught as an adjunct faculty member in AUC’s Department of Political Science.

As Egypt’s minister of the public business sector, Hisham Tawfik is moving forward with plans to develop and grow public-sector companies. Tawfik has more than 30 years of experience in investment banking. Co-founder of EFg-Hermes, he previously served as CEO of Vantage Securities and Arabiya Online brokerage Company, chairman of Arab Petroleum Investment Corporation and board chairman of Cairo Solar. He was also adviser to Egypt’s minister of finance from 2005 to 2007. He served as a board member of several companies, including the National Company for Construction and Development.

0 comments on “Voice of the People”