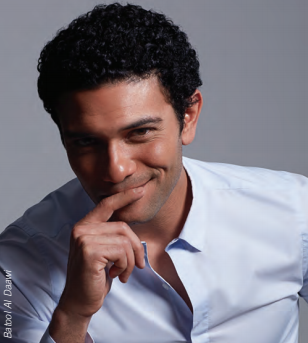 Arts, fashion and film: Alumni in this category have inspired or contributed to advancing theatre, music and the arts. They have played a role in enhancing the media, entertainment and arts industry with their unique talent and performances.

Haifaa Al-Mansour gives new meaning to the term “big shot.” She has made waves in the region and internationally as Saudi Arabia’s first female filmmaker.

Showcasing her film and directing expertise with her movie shorts, The Bitter Journey (2005) and The Only Way Out (2001), Al-Mansour has continued to deliver — writing and directing Wadjda (2012) which made its premiere at the 2012 Venice Film Festival and is the first full-length feature shot entirely in Saudi Arabia. It was also the first Saudi Arabian submission for the best Foreign language Film category in the Oscars.

Al-Mansour filmed the documentary Women Without Shadows (2005), which was shown at 17 international film festivals. It received the Golden Dagger for Best Documentary in the Muscat Film Festival. She has also directed Mary Shelley (2017) and Netflix’s Nappily Ever After (2018). She recently completed shooting her latest film, The Perfect Candidate (2020).

Lobna Abdel Aziz joined AUC at age 15 and was crowned Miss AUC in 1954. Abdel Aziz later received a scholarship to Cambridge University and went on to become a successful actress appearing in a range of popular films, including El Wesada El Khalia (1957), Gharam El Assiad (1961) and The Yacoubian Building (2007).

Rami Imam made his debut as an actor in Al Noum fi Al Asal. Since then, he has worked as an actor, director and producer, establishing the production company Magnum and directing films and television shows such as Hassan wa Morcus (2008) and Al A’raaf (2013).

Singer and performer Hisham Abbas has been a hit since the early 1990s, with popular songs including Wana Wana Wana, Ta’ala, Shoofi and Habibi Dah, among many others. He has received multiple awards, including Orbit’s Arabic Song Award in 1997 and AUC’s 2012 Distinguished Alumni Volunteer Award.

Injy El Mokkaddem started off her career as a TV host in the program El Sellem we El Tho’aban. In 2006, she acted in the TV comedy Ahmed Itgawiz Muna. Following the show, she took part in several TV and movie productions, including Layali Eugenie (2018) and Hekayat Banat (2017).

Theatre director, playwright and cultural manager, Ahmed El Attar is the founder and general manager of Orient Productions, which hosts diverse arts and culture projects, including Studio Emad Eddin and the Downtown Contemporary Arts Festival. In 2018, El Attar was granted the title of Knight of the Order of Arts and Letters by the French Ministry of Culture.

Abu’s brainchild, Talat Dakkat, was released in 2017 and became what many describe as the prototype of happiness. With more than 470 million views on YouTube, Abu has successfully positioned himself as a talented singer, composer and songwriter. Previously, Abu worked in brand management at P&G for seven years.

Jude Benhalim founded her namesake designer brand when she was just 17, partnering with her mother, Rana Al Azm. Her unique brand gets its inspiration from her family’s roots and her vibrant surroundings. She handcrafts modern and bold pieces while preserving femininity. Her designs aim to honor women, daring them to “embrace and express” their individuality.

For Farida Temraz, fashion extends beyond making a dress to creating a character

Farida Temraz’s career as a fashion designer has been one of many firsts. She was the first Egyptian designer to dress stars for the Oscars, the first to be recognized at fashion weeks in London and Paris, and the first, in 2017, to be named best Female Couture Designer during New York Fashion Week. While pursuing her master’s at AUC, Temraz was the first student to focus on fashion communications.

Her education has played a significant role in the success of her young couture brand, Temraza. “It helped me do what I love doing, but with an academic twist,” she says.

Fashion design was not an expected career for someone like Temraz, who succeeded academically. but it was her passion — one that has always been about more than clothes. “We don’t make dresses. We create a character. We make people perceived the way they want to be perceived,” she says. And on the international stage, those perceptions become “a representation of a country.”

Temraz is certain that having AUC on her résumé has opened doors to the global fashion world. Her academic foundation in marketing and communications, coupled with business strategy learned from her father, has helped her take the fullest advantage of those opportunities. A quality education, she says, “is something that stays with you forever. It’s limitless.”

Temraz plans to teach at AUC, leading a certificate program focused on fashion communications — the first-of-its-kind in Egypt.

And the Emmy Goes To …

Although Yasmin Elayat grew up creating stories and animations, she never considered herself a storyteller. As a computer science major at AUC, she saw art as a hobby — something she couldn’t possibly make a career out of. Yet, in 2018, Elayat found herself on stage accepting an Emmy Award for Outstanding New Approaches: Documentary as the director of Zero Days VR (Sundance 2017).

Elayat first stepped on AUC’s campus to spend a year abroad, only to find herself compelled to stay — transferring as a full-time student a year later. After graduation, Elayat spent a few years working on interactive art installations between New York and Cairo, eventually moving to New York. Suddenly, she found herself unsure of her next career move. “I realized, ‘I can’t become an engineer again. I’ve morphed into something else,’” says Elayat.

Elayat co-founded Scatter, a creative company recognized for pioneering the emerging discipline of Volumetric Filmmaking, which was used to create Zero Days VR. Having forged an unconventional career that converges both art and technology, Elayat describes her path as “a journey of trying to connect the dots” to find her place in the world. “I feel like I’ve always had imposter syndrome,” she says. “I’m this engineer that has always wanted to move into the storytelling world. Now, I feel like I can say I am a storyteller; I am a director; I am an artist. I’m finally at the point where things are converging.”

Elayat tributes much of her motivation to her father, Khaled El-Ayat, former professor of practice in the Department of Computer Science and Engineering at AUC and founder of Actel Telecom Engineering Service. “I grew up in the startup halls. I’d go to Actel with my dad and just play in the halls and draw on the whiteboards while he was doing his thing, and yet he still had this wonderful balance as a father and supporter of my artistic abilities. Everything he did — he did with so much passion, and that has been so inspirational for me.”

After graduating from AUC, Amina Khalil continued her theatrical studies at the Lee Strasberg Theatre & Film Institute in New York and further at the Moscow Art Theatre in Russia.

Lights, Camera, Action … For famous actor, writer and producer Asser Yassin, “action” didn’t always mean a career as an actor. Getting his degree in mechanical engineering at AUC, Yassin was set to continue in this field upon graduation. Still, it was also at his alma mater that he got his first taste of performing. “My favorite moment at AUC was my first time being on stage,” he explained. “The theatre gives you very prompt and direct feedback from the audience.”

Yassin was set to continue in this field upon graduation. Still, it was also at his alma mater that he got his first taste of performing. “My favorite moment at AUC was my first time being on stage,” he explained. “The theatre gives you very prompt and direct feedback from the audience.”

His major still plays a role in the career decisions he makes. “I have criteria for selecting my roles, which is actually based on a scientific c method,” he says. “Whatever you’re studying will actually be very beneficial to what you choose in the end.”

Mahmoud El Esseily started his career singing to a small group of friends on AUC’s platform and near the Social Sciences Building at AUC Tahrir Square. As a freshman at AUC, he won first place in the Talent Show and used to sneak into AUC Tahrir Square’s Oriental Hall during Assembly Hour to play the piano. The first time he had the chance to sing on stage was at a mini-performance on the Greek Campus, where he sang his first hit El Dunya Magnoona, which received vigorous applause from the audience “I was asked to sing it three times, and I knew then that I had something to offer as a singer.”

Nesma Mahgoub solidified her stardom after winning the eighth season of Star Academy Arabia in 2011. Mahgoub has a successful singing and teaching career, voicing Elsa in the Arabic dub of Disney’s Frozen and teaching in the Department of the Arts at AUC. Mahgoub, who started singing at the age of 10, is currently directing the AUC Pop Ensemble, which performs a range of genres including pop, rock and gospel. Mahgoub sings in a variety of languages, including Arabic, English, Italian, German, Latin, French and Hindi. Her singing genres include opera (soprano), jazz, pop, musical and Oriental. She was named best Female Youth Singer by the Middle East Music Awards. She is currently the musical director of CineMania and working on her original songs.

Yosra El Lozy’s relationship with AUC goes back to when she was 6 attending theatre rehearsals held by her father, Professor Mahmoud El Lozy ’76, ’79, and watching his students perform. She is now a successful actress with awards under her belt for her roles in Qobolat Masrouqa (2008), Bel Alwan El Tabeaya (2009) and Heliopolis (2010).

In 2012, Tarek El Ebiary became the youngest Egyptian artist to write, direct
and act in a commercial Egyptian film — his senior project at AUC — which was released in Egyptian cinemas. He acted in more than 40 professional productions (four films, 18 TV series, 15 plays, two radio programs and 1 cartoon series). He is the founder of AUC’s Theater & Film Club

After two years of working as a film editor at Rotana, Engy Wegdan started her acting career in 2006 with the situational comedy Tamer wi Shawkeya. Her works include the popular TV show Tel’et Rohy (2018) and Saheb Al Sa’ada (2014), and movies such as H-Dabour (2008).

Abu Bakr Shawky is an Egyptian-Austrian writer and director whose globally renowned film Yomeddine was selected to participate in the 2018 Cannes Film Festival and compete for the Palme d’Or. The film also received the Francois Chalais Award and was Egypt’s official submission for the 91st Academy Awards. Shawky is known for his work on Things I heard on Wednesdays (2012) and The Looming Tower (2018). Recently, Shawky won Variety’s MENA Talent of the Year Award at El-Gouna Film Festival. In 2018, he was listed by Forbes Middle East among the Top Five Arab Directors on the Global Stage.

A week before her freshman year, international mezzo-soprano Gala El Hadidi joined the Cairo Opera House as its youngest singer at age 18 and went on to perform as a solo artist in Italy, Germany, France, Switzerland, England, Belgium, Denmark, Norway, Finland, Turkey, Morocco, Algeria and the United States. After graduation, El Hadidi received scholarships to attend the International Bach Academy in Stuttgart, Germany and to study a Master of Music at Yale University. In 2008, she was awarded an outstanding achievement prize and recognition by Egypt’s Minister of Culture. She is the first Egyptian to receive an achievement award by the Metropolitan Opera National Council Auditions in 2010, as well as the first Egyptian to be nominated for the BBC Cardiff Singer of the World in 2013. Since 2013, El Hadidi became the first Egyptian opera singer to perform the title role of Carmen internationally.

0 comments on “All About Arts”