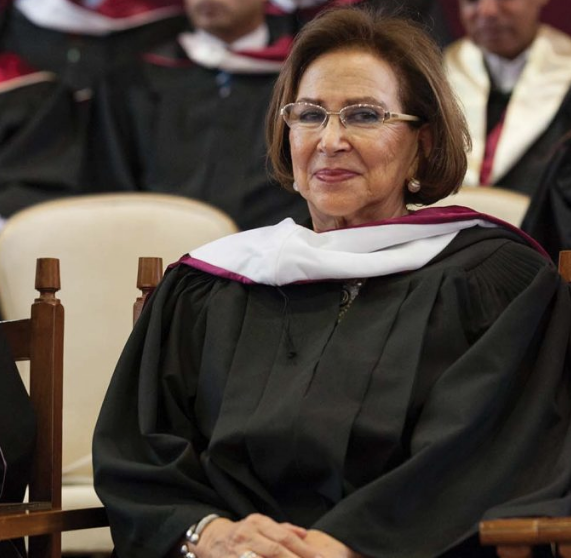 Service and Philanthropy: Alumni in this category engage in civic leadership through volunteerism and service to their communities. They are philanthropists, policy advocates and humanitarians working to induce positive change to make the world a better place.

Yousriya Sawiris is a dedicated philanthropist, businesswoman and former parliamentarian

Recipient of an honorary doctorate from AUC in 2014, Yousriya Sawiris is a renowned businesswoman and philanthropist. She is currently chair and managing director of the Enhancement of Integrated Services and Waste Recycling, Egypt’s only solid waste management company that she founded in 2008.

Sawiris is a former member of the Egyptian Parliament, serving from 1995 to 2000. She founded several charitable organizations, including the Sawiris Foundation for Social Development, Egyptian Organization for Street Children, Egyptian Liver Care Society, Association for the Protection of the Environment and Cleveland Clinic International Leadership Board.

Sawiris serves on the boards of numerous organizations, such as the National Council for Women as well as the National Council for Childhood and Motherhood. She has been nationally and internationally recognized for her work, having received the Global Women’s Leadership Award in Cairo in 2006 and the Clinton Global Initiative Award in 2010. She was also named in 2012 as one of Women’s eNews 21 Leaders for the 21st Century.

Previously, Sawiris trained at PricewaterhouseCoopers and worked as a financial adviser at the Ford Foundation’s regional office in Cairo for more than a decade. She then registered as an auditor and opened her own private audit practice, which specialized in auditing not-for-profit organizations. She is a graduate of Harvard University’s Executive Education programs.

A philanthropist, global business leader, and entrepreneur Yousef Jameel has a long legacy of giving, both at AUC and worldwide.

At his alma mater, he established the Yousef Jameel Science and Technology Research Center in 2003, bringing together top-notch researchers and scientists in the field of nanotechnology at a time when there were no research facilities in Egypt capable of developing micro/nano devices. In 2004, he launched the Yousef Jameel MBA Fellows Program, which continued for more than a decade. He also funds the Yousef Jameel GAPP (Global Affairs and Public Policy) Leadership Program, supporting 300 fellows in 12 cohorts of 25 Egyptian graduate students per year. In 2009, he inaugurated the Abdul Latif Jameel Hall on the New Cairo campus in the name of his father, who previously established the Abdul Latif Jameel Center for Middle East Management Studies at AUC Tahrir Square and Abdul Latif Jameel Chair in Entrepreneurship. In 2010, he initiated the Yousef Jameel PhD in Applied Sciences and Engineering Fellowships, which graduated more than 40 students. He received an honorary doctorate from AUC in 2008.

Outside AUC, Jameel supports numerous institutions in education, scientific research and the arts, such as the Yousef Jameel Academic Program, which he founded in 2004, and Yousef Jameel Online Centre for Islamic and Asian Art at the University of Oxford’s Ashmolean Museum.

Sameh Makram Ebeid was elected to the Egyptian Parliament in 2012, representing the Red Sea governorate. While at AUC, he helped transition the student class representation from High board to what is now the Student Union. In 1973, Makram Ebeid was the first Student Union president elected by the entire AUC student body and enabled AUC to join the General Association of Student Unions of Egypt. He also led what he remembers to be the first strike at the University so students could support Egypt in the October War. “The success of the first strike really showed how strong we were as a student body because we acted together,” he says. As a parliamentarian, Makram Ebeid’s main concern is not only the welfare of his constituents, but Egypt as a whole. “We must all unite and work together –– secularists, liberals and moderates. It is not beneficial to be fragmented. Together we stand; divided we fail.”

An international expert on refugee and humanitarian affairs, Shaden Khallaf is senior policy adviser for the Middle East and North Africa at the United Nations High Commissioner for Refugees, where she leads policy analysis and design for the MENA region. Khallaf, the most senior Egyptian woman in the organization, has led partnerships to address refugee issues, including initiating the MENA Civil Society Network for Displacement. She has lectured at AUC’s Center for Migration and Refugee Studies and Department of Law as well as at the Center for Strategic Studies at the University of Jordan. She spearheaded catalytic partnerships with civil society, academia and the private sector during the largest humanitarian crisis since World War II. Khallaf’s experience includes working on international human rights law, post-conflict transitions and peace building, gender policy, refugee women and child protection, advocacy and communications, prevention of violent extremism, and Sustainable Development Goals. She has been a fellow at the Graduate Institute of International and Development Studies in Geneva and has publications on displacement and development in the Middle East and North Africa.

As an anthropologist, Fadwa El Guindi’s research involves fieldwork with Arab, Nubian and Zapotec cultures as well as Arab Americans. She previously served as distinguished professor of anthropology and head of the Department of Social Sciences at Qatar University, and was a professor at the University of California, Los Angeles; University of Southern California; and Georgetown University. Her expertise on the Middle East brought her to the White House under Bill Clinton, and she frequently gave lectures to diplomats assigned to the Middle East at the Foreign Service Institute of the U.S. Department of State. Currently, El Guindi lectures internationally and has been elected a fellow of the World Academy of Art & Science.

Diagnosed with cerebral palsy as a 1-year old, Magdy Abdel Sayed has worked to raise awareness of disabilities in Egypt and received a Cambridge University prize as an Egyptian student who has “overcome the most.” He is a motivational speaker and ambassador to Helm, and took part in Egypt’s World Youth Forum.

Amena El-Saie and Ramez Maher established Helm in 2014 to empower people with disabilities and educate individuals and organizations on ways to accommodate them. Through Helm, both alums aim to promote full inclusion for people with disabilities, working to make Cairo and surrounding cities such as Luxor and Giza more accessible. In 2013, Helm won first prize in the Negma Social Entrepreneurship Competition at the Massachusetts Institute of Technology and was awarded the Rise Egypt Fellowship at Harvard University from 2014 to 2016.

Speaking at his commencement, Mohammed El Shafie said his dream was “to avert the danger of terrorism by establishing a genuine philosophical foundation for a true understanding between East and West.” Currently, El Shafie is studying at Harvard Law School. During his time at AUC, El Shafie wrote for AUC Times magazine and was a member of the Philosophy Club. He founded a reading society that brought together students from AUC, Oxford and American universities with the goal of promoting discussion and engagement among students of diverse backgrounds. He worked with the Egyptian Parents Association for the Visually Impaired, teaching Braille reading and writing, Braille music, adaptive technology, English and Microsoft Word. He volunteered with Bookshare, working on scanning and proofreading books for Braille translation. He also took the initiative of developing the first draft of an electronic Braille edition of Shakespeare’s complete works.

In her freshman year at AUC, Raghda El-Ebrashi founded an organization that provides microloans to underprivileged entrepreneurs and vocational training to low-income workers. She was technically too young at the time to run a non-governmental organization. And, by her own admission, El-Ebrashi’s work distracted her from her studies. But University administrators and many professors encouraged her.

“They never said I was too young for this. Actually, they said I am young for this, but they support it,” she says. Today, Alashanek Ya Balady, which El-Ebrashi heads, has been operating for more than 16 years and is one of the biggest youth NGOs in the country. “AUC was the hub.”

One thing that set El-Ebrashi’s organization apart in its early years was that it relied wholly on the work of university students. The group created a model and franchised it to students at other schools — something El-Ebrashi believes was possible only because of how AUC fosters involvement in student activities as a central component of a liberal arts education.

Students don’t attend AUC simply to learn engineering or business. “You are joining a whole campus; you are not joining a program,” says El-Ebrashi. “It’s what makes AUC stand out. I think the role of AUC extends beyond the education domain. It’s building the personality of students who join to be active citizens.” And she thinks that’s critical to Egypt’s future. “Quality education is a human right, but it is also essential for the economic and social development of the whole country.”