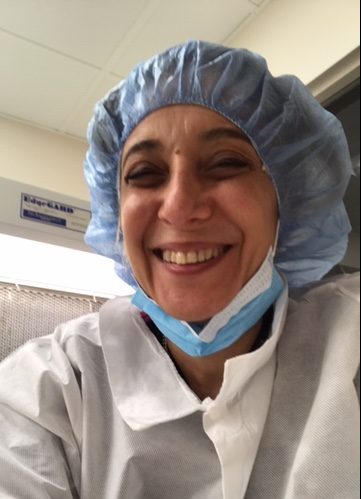 A U.S.-based alumna reflects on what it’s like to be a health care professional during the pandemic

For Hanaa Ibrahim ’90, heroes nowadays look very different from the ones we see in movies. Instead of capes, they’re draped in white coats and scrubs, and instead of fighting off villains, they’re treating and containing COVID-19. However, while they do not look the same, they share a common goal: to save lives. As many of them as possible.

Ibrahim is the director of pharmacy in Suffolk County, Long Island, New York. When the coronavirus hit the United States, New York became the epicenter of the pandemic, with more than 350,000 confirmed cases and over 40,000 in her county. Ibrahim — whose responsibilities as pharmacy director include overseeing the Suffolk County central pharmacy, medical programs in two jails and vaccination programs for uninsured residents — saw her duties expand with the rapid spread of the virus.

“I oversee the distribution of testing kits to the nursing homes, fire departments and other centers so they can test the public,” she said. “We also created PODs, Points of Distribution, where we create sort of a mobile hospital to draw blood and test. We’re also taking care of tracing patients and all those they had been in contact with in the past 14 days and possibly have been exposed to the virus.”

Ibrahim is playing a large role in the county’s coronavirus public health response. Her days are filled with meetings, site visits, emergency preparedness, tracking cases and ensuring people are properly tested and traced. When a vaccination for coronavirus becomes available, she will be in charge of the vaccination program in the county.

“The efforts played out beautifully,” she said about the county’s public health initiative. “We flattened the curve. Had we not flattened it, we would have been worse than Italy.”

But that doesn’t mean it’s over. As the United States began reopening the economy, states have started to see a rise in the number of cases. And more recently, the country is witnessing a wave of public gatherings as people take to the streets to protest police brutality.

“How is this going to translate pandemically? I don’t know,” Ibrahim said. “It’s like a perfect storm.”

For now, Ibrahim and her colleagues have put together policies and procedures for all possible scenarios. “We have a plan A, plan B and plan C,” she said. “It’s emergency preparedness — all ‘what if’ situations.”

Thinking ahead is nothing new for Ibrahim. In 2008, she was the first in New York to introduce the practice of Emergency Room Pharmacists, now a common — and deemed critical — practice across the country. She was met with skepticism when proposing this idea but went on to become a health care pioneer in the state.

“I believed in what I was doing,” she reflected. “In your job, don’t look under your feet; look 10 years from now. The world 50 years ago is nothing like the world today. If you think your job is going to stay the same your whole life, you’ll probably lose it.”

And it’s with that same mentality that she puts on her cape each morning, saying goodbye to her family as she and thousands of other health care workers go to the frontline. She says that she’s tired and exhausted, and the slightest things have started to make her cry, but that doesn’t stop her from heading to her office. If anything, it has made her stronger.

“Every day is a challenge, but every day is also a success story and milestone,” she said. “I appreciate my family more, my friends more, my lifestyle and my religion even more now.”

While Ibrahim is dedicated to doing her job, she wants everyone else to do theirs too. For now, she advises people to keep their social distance, wear masks, be conscious and not take the matter as a joke. For the future, she wants governments worldwide to be transparent and work together when fighting the same battle.

“What hit China hit the rest of the world in one month and a half,” she said. “We’re going to have more pandemics in time. When that happens, countries shouldn’t point fingers. They should learn from each other’s mistakes and think globally.”

Even as Ibrahim’s career progressed since graduating from AUC with a bachelor’s in chemistry in 1990, followed by a bachelor’s in pharmacy from St. John’s University and a doctorate in clinical pharmacy from Shenandoah University, she says that AUC has been with her every step of the way. It’s at AUC, she affirmed, where she was taught to think critically and solve problems creatively.

“Thank you, AUC, for everything you’ve done for me,” she said. “Where I am now is all a product of AUC. It’s not an institution; it’s a culture and a family that taught me how to think.”

And it’s as an AUCian, “heart and soul,” she asserted, that she will continue to fight for people’s lives.